Shiona Morton, a well known playwright, is working with Burn The Curtain to adapt stories from The Company of Wolves by Angela Carter.

Shiona’s Blog:  Adaptation. There’s the film, which I love, which explores the perils of adapting a book into a movie script. It’s a great study in the process of writing and the tricks a writer must play on him/herself to get those words down on paper.  However adaptation brings with it, all sorts of other concerns. The original, whatever it is, belongs to someone else, and might well be venerated by many more people than the author. The responsibility of shifting the form, yet retaining the essence, looms large. This year, for the first time, I have been working on adapting someone else’s work into a piece of performance, and not just any work, but the wonderful wolf stories of Angela Carter. In addition, it is not just any performance, but an outdoor event which requires the audience members to either run or walk a route. Along the way they must locate a satisfying story, and share what they have discovered. 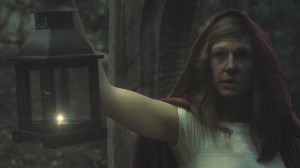 The first part of the process has been about immersing myself in the world of four stories, absorbing Carter’s rich language, her precise definitions, her ability to conjure a landscape. The stories chill and surprise, up-ending our view of fairy tales yet placing us firmly within their boundaries. When I was a child I learned bible verses for Sunday school, and they remain in my brain to this day, in the beautiful seventeenth century language of the Authorised Version. Similarly, the Carter phrases linger, once they are studied, and filter out into the performance text, sometimes little altered.

The next stage has been to explore the logistics of the performance, realising that the stories must interweave, that characters must pop up in each others’ tales, that wherever the audience members start and end their journeys, they must have experiences that uncover a narrative, and one which honours Carter’s magical world. The shifting outdoor space and the movement of the audience have determined the structure. Information has been planned to leak through in all sorts of ways, not only through the conventions of text and dialogue. It has been a challenge, full of discussion and exchange and the drawing of many diagrams.

I’ve really enjoyed the collaborative nature of this project with Burn the Curtain Theatre Company, especially the workshop development days in a Devon cider barn. There couldn’t have been a more atmospheric location to unpick these magical tales. I’m looking forward to the walk in the woods (not sure I’ll manage the run), and the story-hunt to come.