Rewind 20 years. I’m 13, sat in a sparsely populated class because it’s sports day and I’m a ‘reserve’ for my team. There is a knock at the door. It’s another student.

“Excuse me sir can we talk to Alex please?” Permission granted.

In minutes I’m changed and on the starting line. Ready, set, go! Three and three-quarter laps of the less then smooth grass running track.

What was I running for? Team points.

What was I running from? Maths (I would have done anything to get out of maths.)

The last 100 metres – sprint hard. Legs burn, breathing is heavy, don’t neglect arms. I cross the finishing line… fifth. No team points. Just the knowledge that I had played my small part in sports day eventually. My dreams of being a professional sportsmen were already over by then. But a lesson called Drama seemed to fill that void… 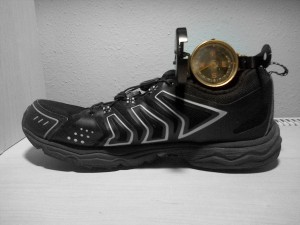 The Company of Wolves is another departure for us. We have split audiences up before but not in this fashion. Taking runners and walkers down different paths to different experiences alongside shared ones. All in the failing light of the day. We’re rather enjoying our new venture into the night “muhahahahaha.”

Promenade theatre always coughs up a unique challenge. You see I’ve had a few mad dashes to get to other scenes, all actors do. However I can safely say I hadn’t been required to run 2k to get to my next scene before. For that reason alone pre-rehearsal training was essential. The last time I ran this regularly was my school days. No audience wants to struggle to hear a wheezing actor! Also promenade, like running, can at times give you a strong sense of isolation. Which is rather handy when playing someone like The Huntsman.

Who is he? He is an amalgam of various forms of huntsmen that appear in Angela Carter’s stories. Part detective, part survivalist and thanks to a cool costume provided by Ruth Webb – part bird of prey. The Huntsman exists on the periphery, spending a lot of time off the path. Which is only advisable for the experienced hunter. 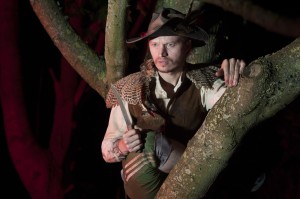 What am I running for? The story.

What am I running from? I can’t possible say. I’ve already revealed far too much…