Making this show, I’ve been thinking a lot about wolves.  I’ve researched them and I’ve tried to move like them, I’ve tried to think like them and see the world like them.  I’ve even found myself locking eyes with a wolf-like dog in the midst of our outdoor rehearsals and freezing, with ears pricked, as some confused half-recognition passes between us.

In her book Women who run with the Wolves, Clarissa Pinkola Estés writes:

“If a story is seed, then we are its soil.  Just hearing the story allows us to experience it as though we ourselves were the heroine who either falters or wins out in the end.  If we hear a story about a wolf, then afterward we rove about and know like a wolf for a time… In a very real way, we  are imprinted with knowing just by listening to the tale”.

I stumbled on these lines mid-way through the making of Company of Wolves, and they came back to me with a bump the day after our opening night.  I’ve been playing the character Alice, a woman raised by wolves, ‘civilised’ a little by nuns, but who – throughout our telling of the story – never speaks, only whimpers and howls.  On the second day of our run in Exeter I bumped into someone who’d been in the audience on our opening night.  He was coming out of a doorway, I was going in, and we collided in the porch.  He did a double take as he realised how he knew me – then, without a moment’s thought, he did the only sensible thing.  In mid-afternoon in a public car park, he lifted up his chin and he howled. 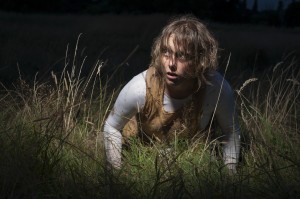 Wolf Alice in the Wild Woods

As a performer I know from experience how stories that you immerse yourself in can ‘imprint’ themselves on you, running through your dreams and in the background of your subconscious, becoming more and more a part of you the more you bring them to life.  Each performance, each production, accumulates in your memory – your history – and becomes (as Estés would have it) a part of your ‘knowledge’.  And I can think of no greater response from an audience member than for them to reveal how a story you shared together, an experience you were both part of, has imprinted itself onto them in some way.  The howl said it all.

I think this is one of the most important things we try to do in our shows, this attempt to include our audience in the imaginative work of telling a story.  (Estés calls it ‘participation mystique,’ or “the ability of the mind to step away from its own ego for a time, and merge with another reality”).  It’s an attempt –  through story, through play, and a leap of imagination – to create a temporary community of participation.  We could never tell stories without an audience.  In fact we need you – we want you – to help us tell our stories (and to add something of your own to the mix), because there’s something so joyful in the combination.  We all feel the magic of creating something together.  You surprise us, you lift your voice and howl with us, and we love it.